Home
iPhone
Apple iPhone 8 will be launched on September 6th

Apple iPhone 8 will be launched on September 6th

The Apple iPhone 8, the iPhone 7s and iPhone 7s Plus are coming soon. At least that’s what our experience tells us: Apple has a tradition of unveiling its new phones in September, which is just two months away.

We already seem to have a general understanding of the new iPhone 8: rumors paint a picture of a phone with a larger OLED display with a new aspect ratio fitting in a smaller body, a new design with glass on the back and the front, and a metal frame, as well as a new 3D face scanning technology that might replace or augment the Touch ID fingerprint scanner.

Apple is expected to go all out with features on the iPhone 8 and position it as a new type of a ‘pro’ phone with the high price associated with such a device.

Lastly, what we seem to have more certainty about is the release date of the new iPhones. Samsung is rushing to introduce its new Galaxy Note 8 on August 23rd, which is always a good sign that the rush is to outpace Apple’s iPhone launch. Here is the expected announcement and release dates for the new iPhone series: 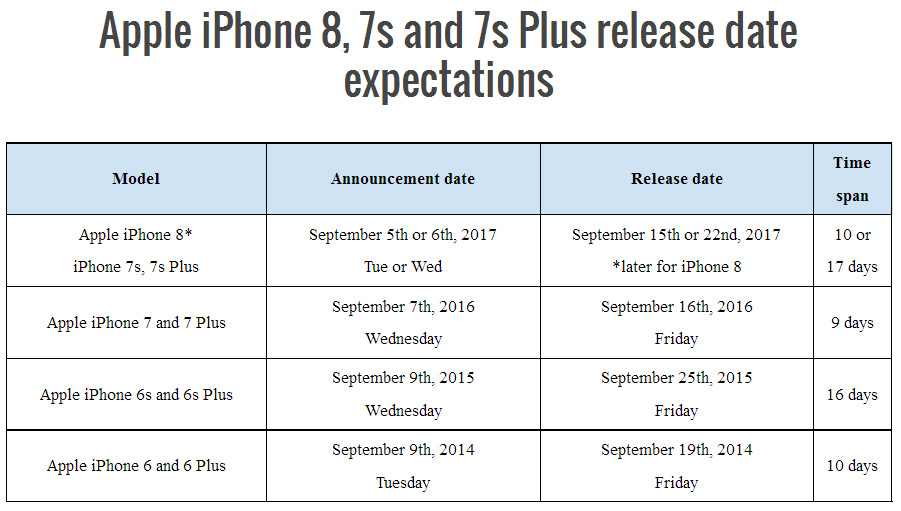